The development environment for the cloud is complex because Docker and Kubernetes work differently on the major OS platforms and because of the need to install tools from the cloud vendors. In this lab you will have to choose the environment for yourself based on your machine and level of setup effort. There are tradeoffs that I will discuss so that you can make the best choice. You are not locked in. You can change your mind at any time. 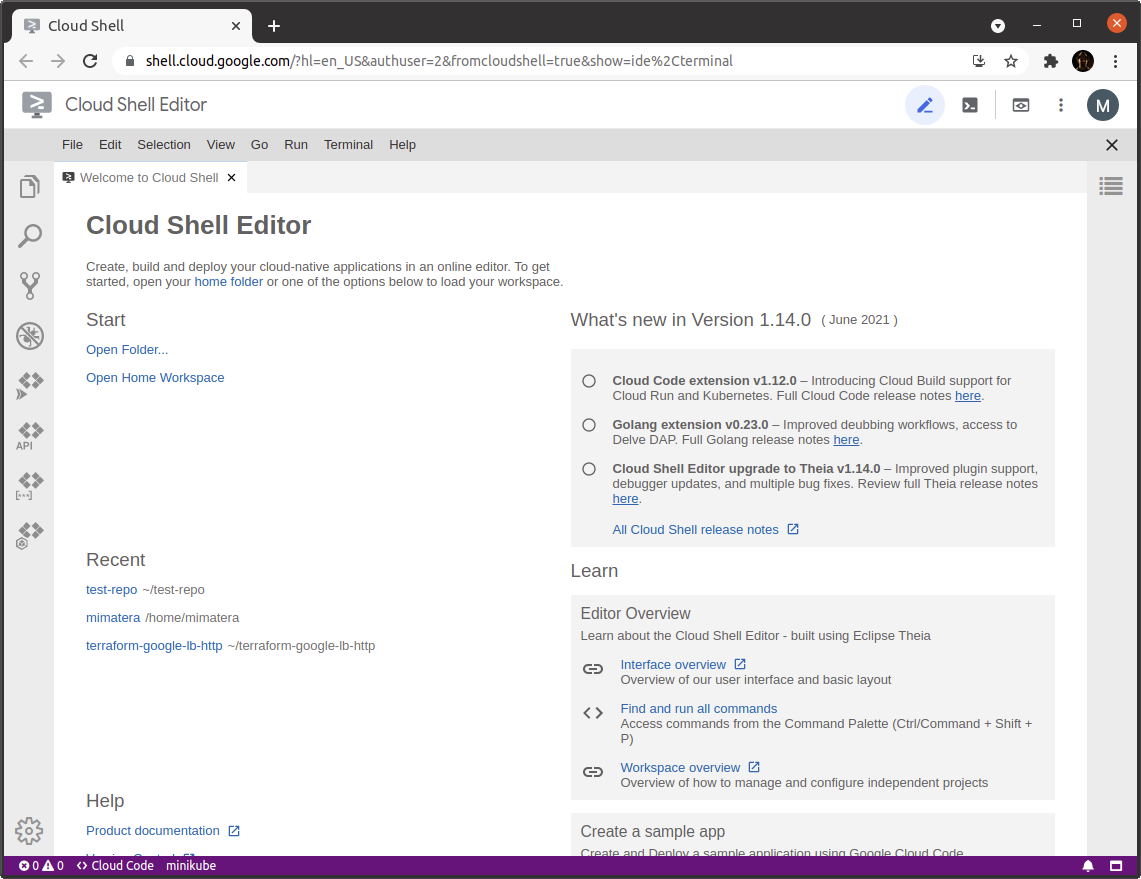 The editor runs on a Linux VM with all of the software installed except for Ansible. To install Ansible follow the instructions below:

If you have used the Cloud Shell before and you want to start fresh you can reset your home directory in the Cloud Shell. This operation cannot be undone!

By far the fastest and most convenient way to develop cloud applications is to setup your computer with everything you need. This gives you access to the most cost effective compute resources (as compared to buying a VM) and is usually the easiest way to manage files. However, unlike using a VM in the cloud your files are not accessible from anywhere and setting up a local environment can be tricky.

These instructions will setup either a personal Ubuntu machine or a jump box that you’re using to support another OS setup.

Make Sure curl is Installed#

The curl program must be installed and is used by the next steps.

Do NOT install Docker if you’re using Ubuntu on WSL2. Docker is already setup to nest with your Windows installation. This will break it.

You have to logout and login again to assume the docker group.

Docker on Windows creates and runs containers inside of a VM. On Windows 10 and 11 there is the option to run containers in the Windows Subsystem for Linux Version 2 (WSL2). Follow this guide on Setting up a WSL development environment. Not all of the steps are necessary. Perform the following ones:

At the end you should be able to get an Ubuntu prompt in vscode that supports the docker command.

Perform the steps in Installation on Ubuntu to make sure the Ubuntu VM is configured. DO NOT install Docker engine on Ubuntu, it’s already installed.

Most of the tools that run on Ubuntu will run similarly on a Mac. One exception is that Docker Desktop creates a custom VM running Linux, instead of running containers natively. Local development should be possible but there may be hiccups along the way. Follow the guides below to setup what you need:

Docker does not yet fully support M1 Macs! Most things should work.

Having trouble with your local environment? Is Windows/OSX too old? Is your computer too slow? If you answered “yes” to any of these the way to go is to create an Ubuntu VM and use vscode to connect to it over SSH. In this setup the front-end of vscode runs on your computer but the terminal and the files all live on the VM. This is the goto environment for most cloud developers because it’s less sensitive to changes to your computer. There are two variants of this setup:

If your machine has the resources to run a VM then it’s best to use them. Running a VM will reduce your performance and battery life compared with the local setup but will be faster than running a remote VM.

On Windows, Linux and Intel-based Macs the best way is to use Vagrant to create your VM. Do the following:

In an empty directory create a new Vagrant box:

Start your new box. The first start will download the Ubuntu image and may take a while. Subsequent starts will be faster.

Vagrant creates a port-forward so that you can easily SSH into the new machine. You should see something like this in the output:

Add the SSH information to your ~/.ssh/config file. This will make it available for use in vscode. Put in the following stanza:

Change /path/to/Vagrantfile to match the new directory you created.

In the remote systems explorer in vscode you should see “devbox”. You might have to press the “reload” button. Selecting the devbox will open a new vscode window. That’s your development environment! Follow the instructions for setting up Ubuntu in this document.

Using a VM in the cloud is a great way to go. You can scale the machine to meet your needs and you never have to worry about loosing your files. However, you will be charged money for the time that the machine is running, so remember to turn it off when you’re not using it. These instructions are for Google Cloud but your VM can be anywhere (I use opus for some development tasks).

Create a Project and Enable Billing#

Follow the instructions to create a project using the console (not the command line). The GUI will prompt you for a billing account, be sure to select your “Billing Account for Education” so that you use the credits you received through class.

It helps to have a default regions and zone. If you don’t have one set there has to be a --region and --zone argument to most gcloud commands. Here’s an inexpensive choice:

Use this command to create your dev box:

Configure SSH to the Dev VM#

The gcloud command will configure SSH for you. Just run:

After this you should see the VM in your vscode remote explorer.

Start and Stop the Dev VM#

I’ve selected a VM that even if you leave on all the time you shouldn’t run out of money. However, it’s best to turn it off when not in use:

Every time you turn it off and on again it will get a new IP address. When you start the VM you have to reconfigure SSH with the new address:

In the remote systems explorer in vscode you should see “devbox”. You might have to press the “reload” button. Selecting the devbox will open a new vscode window. That’s your development environment! Follow the instructions for setting up Ubuntu in this document.